Adding product to your cart

The Mystery of Banksy

Though no one is quite certain if he’s a man or a team of street artists, Banksy has mesmerized audiences, shocked the masses and befuddled law makers through three decades of graffiti, vandalism and other creative forms of activism.

The line he paints between art and vandalism is so blurred, in fact, that politicians are unsure if Banksy’s creations should be preserved as public art or condemned & removed like any other criminal eyesore.

From Girl with Balloon to Flower Thrower and hundreds of installations in between, Bansky’s unique style has set the standard for aspiring street artists around the globe. His distinct brand has spawned an entire school of students, emblazoning their own dramatic political and social perspectives on walls, buildings, signposts and other unlikely canvases world wide. 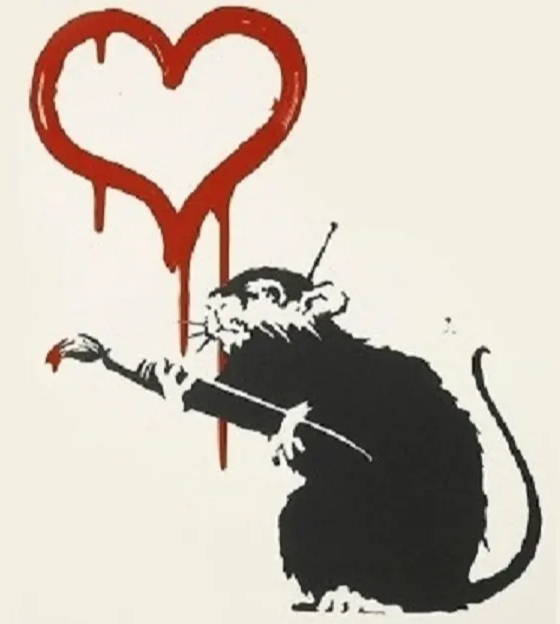 One theme consistently depicted in Banky’s work is that of the rat. Besides being an anagram of art itself, the rat theme holds special meaning for Banksy:

“On Painting Rats, and the Glorification of Them. They exist without permission. They are hated, hunted and persecuted. They live in quiet desperation amongst the filth. And yet they are capable of bringing entire civilizations to their knees. If you are dirty, insignificant, and unloved then rats are the ultimate role model.” - Banksy, Wall and Piece

But rats were more than just a metaphor for Banksy. In fact, their frequent appearances may point to one of Banksy’s few inspirations: Blek le Rat, a French graffiti artist, often credited as the father of stencil graffiti, who was active in the 80’s and 90’s just as Banksy was breaking onto the scene. Of le Rat, Banksy is quoted as saying "every time I think I've painted something slightly original, I find out that Blek le Rat has done it as well, only twenty years earlier."

Girl with Balloon Love Is In the Bin

Girl with Balloon first appeared in 2002 on London’s Waterloo Bridge. Over the years, the work has been used to represent various social causes, from protesting the West Bank Barrier to the attempted swaying of the 2017 UK election. A recent poll ranked Girl with Balloon as the UK’s most beloved work of art.

Over the years, several authorized reproductions were created, including an initial 25 signed prints made in 2003, and an additional 150 signed prints the following year.

In 2018, one of those prints was put up for auction at Sotheby’s and sold for £1,042,000 – a record high for the artist. Moments after the auction’s close, Girl with Balloon seemingly began to self-destruct by way of a shredder Banksy himself built into the bottom of the frame.

Although the prank only partially worked, Girl with Balloon was destroyed and simultaneously birthed a new masterpiece, Love is In the Bin. Sotheby's released a statement that called it "the first artwork in history to have been created live during an auction." The winning bidder wisely followed through with the acquisition, as expert speculation indicates the art’s value has more than doubled since the fateful & partial destruction.

Boasting an equally unrivaled talent on a different canvas, Hobo Nickel Master Engraver Roman Booteen’s creations set the gold standard for other aspiring coin engravers. The designer of The Trap with the Golden Bait, Gold Bug & The Holy Grail - unbelievably intricate works of art etched onto a tiny round metal canvas - pays tribute to one of his admired inspirations with his latest creation, Banksy.

Like Banksy, Booteen is incredibly private in his fame, and few details are known about the life of the artist and his work, especially as it relates to influencing future projects or even acquiring an existing creation. Booteen repeatedly refuses to make his creations available to the public, partially due to the questionable legality surrounding the defacement of circulating coinage, as well as the restrictions surrounding the sale and transport of precious metals. But maybe the reality is more like the mystery surrounding Banksy, best summarized in Brad Pitt’s characterization:

“These days, everyone is trying to be famous, but he has anonymity,” - Brad Pitt

Banksy: the Coin that Almost Shreds

But few parallels could be drawn as serendipitous as the result of the final Banksy coin. With engineering marvels like the Trap and Gold Bug behind him, one would think that no technical challenge could be too great for Booteen to overcome.

Whether it was the moderately successful destruction of Girl with Balloon that influenced the decision to wrap the project early, or just that the creative juices of the master began flowing in a new direction, Banksy is the Booteen coin that almost works. Even with months of design, technical drawings and calculations behind him, Booteen was unable to complete his masterpiece to a fully-functioning model.

Setting functionality aside, the design is a Booteen work of art at its finest. Intricately carved details and embellishments adorn the obverse, with tiny screws and rivets neatly hiding the coin’s secrets.

Hidden behind the replicated & fated frame, Booteen’s hand-made micro-shredder is powered by a thumb-wheel, intricately connected to the shredder by way of a series of tiny gears and wheels, normally used in the finest timepieces and wristwatches.

Always up for a challenge and seeing the unique opportunity to contribute to the success of Booteen’s work, Heads or Tales acquired both the coin and license for limited reproduction in 2019. Our goal is to pickup where the master left off, and create a limited edition collectible for fans worldwide to cherish and enjoy the way the master intended. 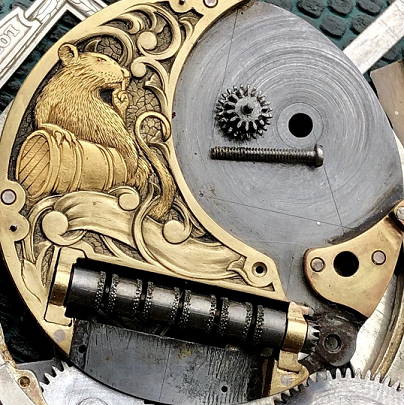 Each handmade Banksy features an original Morgan Dollar, modified to accommodate the intricate gears and other mechanical parts that activate the hidden shredder. It’s the perfect way to pass a note to an admirer or crush, with the ability for the tiny message to self-destruct with the mere flick of a fingertip. Roman’s tribute to Banksy’s Girl with Balloon is crafted from a quarter ounce of 9999 fine gold, ensuring the lasting value of this strictly limited heirloom. Each Banksy Coin ships in a custom Booteen box, and includes a tiny wooden easel for displaying this rare beauty. 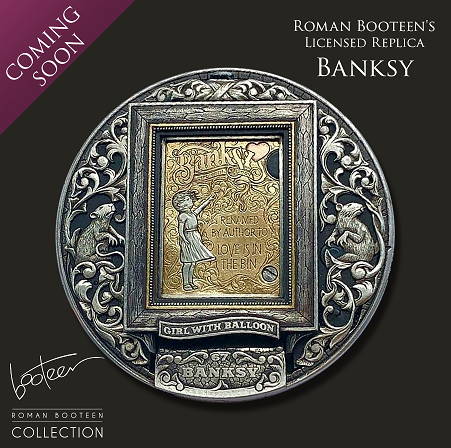 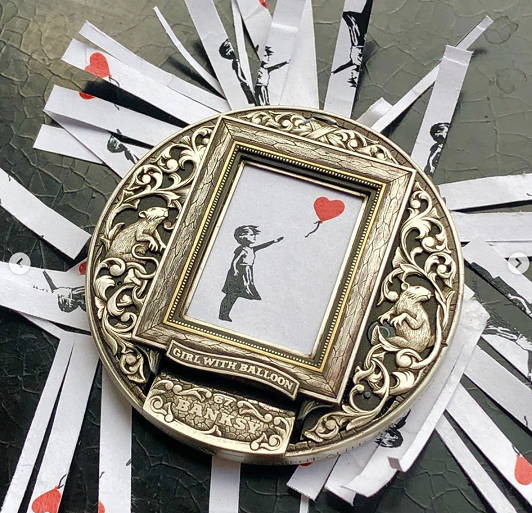 When Hobo Nickel engraving LEGEND Roman Booteen ceased working on his Banksy project, he walked away from it unfinished. The technical complications preventing it from successfully achieving his vision were either too great to overcome, or not interesting enough to be pursued any longer. He left the project in our capable hands and moved on.

Since then, we have worked diligently to recreate his masterpiece AND find the solution to the paper shredder function - an integral component of what we consider to be a successful, presentable collectible for our valued collectors. Today, we are still working to achieve our major goals. Once we are confident in our ability to deliver the Roman Booten Banksy coin worthy of bearing the artist's name, we will begin taking orders and ramping up production. The only thing more important than accomplishing this goal is maintaining the very high standard of quality that Roman and our valued collectors expect from us.

Today, we do not yet have a firm date for the release of the Banksy coin, but rest assured we'll be shouting it from the mountain top when it's ready. In the meantime, we'll continue sharing behind the scenes updates from our work and results so you can see our progress. Thanks so much for all of your support and patience!

The Heads or Tales Team